What Is a Prepaid Funeral Plan?

A prepaid funeral plan is a financial strategy that involves individuals preparing for their funeral expenses in advance. This can involve purchasing a plan from a funeral home, but other options are also available, such as holding the money in a bank account, trust, or insurance policy.

This can be a suitable approach for those who want to ensure that their loved ones are not burdened with the cost of their funeral. Basically, it assures that the funeral costs will be covered while also allowing individuals to specify their preferred arrangements.

The plan typically involves making an upfront payment or a series of payments to be held until the plan holder's death. This money then goes towards covering the costs associated with the funeral and related services.

A prepaid funeral plan involves preparing the means to pay for your funeral beforehand. With this, you can choose how you would like to be remembered without worrying about the financial burden on your family.

You can pay a lump sum upfront or make a series of payments to your prepaid funeral plan. The money you set aside will be held in a trust fund, bank account, or insurance policy, which is then used to pay for your funeral expenses when the time comes.

Aside from preparing for the financial aspect of your funeral, you will need to provide detailed instructions on how you would like your funeral conducted. Choosing a reputable funeral director to execute these plans is also essential.

Once all the arrangements have been made, your chosen funeral director will take care of everything, following your specific instructions. Thus, your family will not need to worry about anything.

There are various ways in which individuals can set aside funds for their funerals:

Also called funeral insurance or final expense policy, burial insurance pays out funds upon the plan owner’s death, which can be used for the funeral, burial, or cremation expenses. Related expenses, such as final medical costs, can also be covered.

In some cases, plan owners can name a funeral home or funeral director as their policy’s beneficiary. However, this is not required.

Upon the plan owner’s death, existing life insurance policies also pay out a sum to nominated beneficiaries. However, funds from this plan can be used for multiple purposes. Thus, plan owners must advise their beneficiaries to use some of this amount for funeral expenses.

A joint bank account allows couples to pool their money. Upon the death of one, the funds in this account remain easily accessible to the surviving spouse without the need to go through probate or the insurance company. Part of these funds can then be used for funeral expenses.

A Payable on Death (POD) account is a bank account in which the funds remain accessible to the holder until their death. Afterward, these funds are automatically transferred to the designated beneficiary. This type of plan can also be used to store money for funeral expenses.

A trust is a legal arrangement that allows money or assets to be held and managed by one party (the trustee) for another party's benefit (the beneficiary). The person establishing the trust (the grantor) can specify that some of the funds in the trust be used for their funeral expenses. 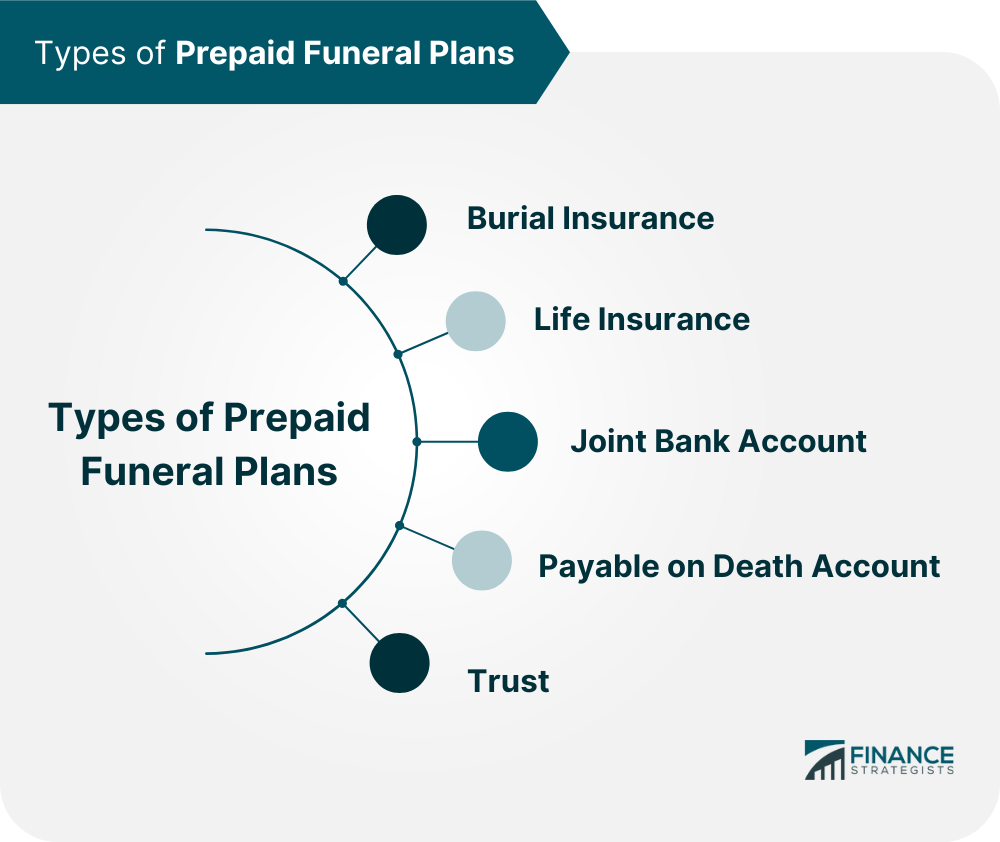 Costs and Expenses of a Prepaid Funeral Plan

The costs and expenses associated with a prepaid funeral plan can vary significantly depending on the chosen plan and the services included.

However, generally speaking, prepaid plans will cover all of the costs associated with a funeral, including funeral director fees, burial or cremation charges, catering costs, transportation expenses, and floral tributes.

As of 2021, according to the National Funeral Directors Association (NFDA), a funeral in the United States can involve the following costs: 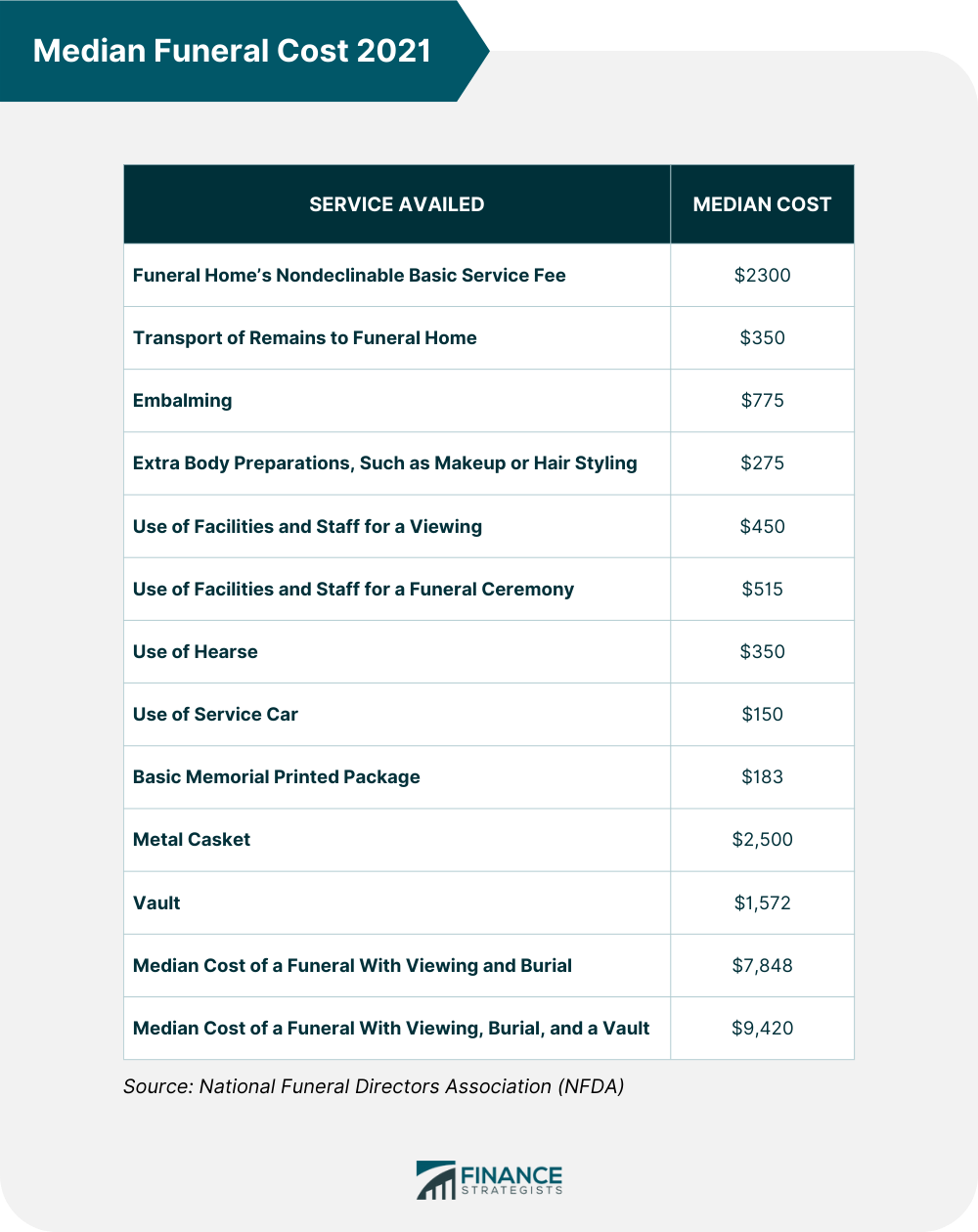 Prepaid funeral plans offer several benefits to those planning their own funerals.

Prepaid funeral plans can help ease some of the financial burden placed on survivors after the death of a loved one. This is especially helpful in situations where funds may be limited or there are disagreements amongst family members over how funds should be allocated.

The funeral can often lead to disagreements between family members over who will pay for what expenses and how much it will cost. A prepaid plan can help minimize such arguments by allowing all costs to be taken care of ahead of time.

Prepaid funeral plans allow individuals to plan their own funerals and burials, ensuring that their wishes are followed. This can be especially important for those with religious beliefs they would like to honor in their final arrangements.

Prices for funeral services are subject to inflation and increased cost of living. With a prepaid plan, the funeral cost is locked in at the time of purchase, allowing individuals to protect themselves against rising costs in the future.

While there are several benefits associated with prepaid funeral plans, it is also important to consider some potential risks before making such an investment.

Prepaid funeral plans are non-refundable, meaning that once the plan is paid for, it cannot be canceled, and the money will not be refunded.

There is always a chance that the funeral home chosen may cease business before the death of an individual. In this situation, it is unlikely that any funds invested in a prepaid plan would be recovered. 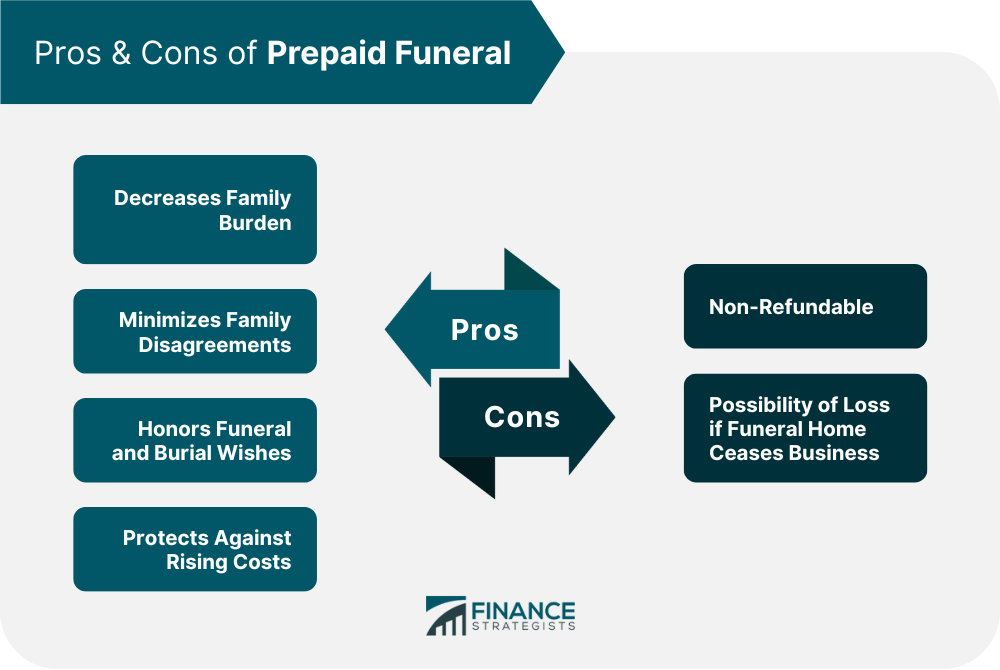 A prepaid funeral plan is a financial strategy that involves individuals preparing for their funeral expenses in advance. It can also include detailed instructions on how the funeral will be conducted.

This approach can involve purchasing a funeral home plan, but other options are also available. Payments can be made in installments or in a lump sum. The funds are then placed into a bank account, trust, or insurance policy, to be held until they are needed upon the plan owner’s death.

Prepaid funeral plans, especially those purchased from a funeral home, typically cover the cost of a casket, funeral service, and other associated expenses. The exact cost will depend on the specific goods and services included in the package.

Prepaid funeral plans can be attractive for people who wish to decrease their family’s financial burdens, minimize possible disagreements, protect against rising costs, and ensure that their wishes are carried out.

However, there are also some risks involved. For example, if you cancel the plan or fail to make payments, you may forfeit all or part of your investment. Additionally, your funds may not be refunded if the provider goes out of business.

If you are considering investing in a prepaid funeral plan, you can consult an estate planning lawyer to see if it is the most suitable option for your current situation.

What is a prepaid funeral plan?

A prepaid funeral plan is a financial strategy that involves individuals preparing for their funeral expenses in advance. It can also include detailed instructions on how the funeral will be conducted.

Can you cancel a prepaid funeral plan?

Yes, you cancel a prepaid funeral plan, but it is important to note that additional fees may be associated with the cancellation. To be sure, you can check the terms and conditions of your plan before finalizing your decision to cancel.

Is it worth getting a prepaid funeral plan?

Whether or not a prepaid funeral plan will be worth it depends on your individual circumstances. Before investing in one, you can consider the cost of funeral services, inflation rates, and all the terms and conditions.

What is not included in a prepaid funeral plan?

The funeral cost does not usually include cemetery plot fees, grave markers, or flowers. These additional costs must be paid separately and may not be included in a prepaid funeral plan.