What Is Ripple (XRP)?

It was released in 2012 by Ripple Labs Inc., a U.S.-based technology company.

As a system, Ripple is an excellent way to make transactions between two parties because it allows for fast, low-cost international payments.

XRP refers to the cryptocurrency offered on the Ripple network. It is often ranked among the top 10 cryptocurrencies worldwide.

Ripple, the company behind XRP, has undergone a number of rebranding initiatives over the past few years.

It all started when Ryan Fugger, a web developer from Canada, created RipplePay. It was intended to be a safe payment choice for online users across a worldwide network.

In 2012, Fugger sold his system to Jed McCaleb, David Schwartz and Arthur Britto. These three engineers modified this technology to include a distributed ledger which aimed to address some of Bitcoin's limitations.

With these changes, they hoped to utilize less electricity than Bitcoin and process transactions in a faster way.

The company they launched was originally called OpenCoin. It rebranded to Ripple Labs in 2013 and eventually became Ripple in late 2015.

Most cryptocurrencies are built on blockchain technology. It is a kind of database that gathers data into blocks or groups which are chained together.

A newly formed block is created as new pieces of information come in. After all the information on that block is completed, it is then added to the chain.

When someone attempts a transaction using the block chain network, that information is sent out to a shared public database. That data is then validated by servers or nodes sharing the information. If separate servers report a match – the transaction is permitted then performed.

Ripple functions in a similar way. However, instead of verifying the information to all users in the shared public database, it only does this with selected and trusted users.

How to Buy Ripple (XRP)

There are a few steps in order to buy Ripple:

Step 1: Create an Account on an Exchange That Supports It

There are several exchanges where Ripple and its cryptocurrency token XRP is traded. A prospective user must first open and validate an account on one of these exchanges.

Every cryptocurrency network entails a unique method of operating. Check first what kind of currency can be exchanged into XRP before proceeding.

Generally, buying a cryptocurrency with fiat currency, such as the U.S. dollar, is simpler than buying it using other cryptocurrencies.

Once you find a trading platform that best suits you in terms of security and usability, you can fund your account and begin purchasing XRP.

Look for the XRP currency on your preferred exchange, then input the desired investment amount.

Once you have purchased it, you will need a secure location to store your XRP.

You should have at least 10 XRP in each of your dedicated XRP wallets to activate your account on the XRP Ledger.

Usage of Ripple comes with a few advantages including:

The confirmation of transactions in Ripple XRP takes relatively fast. They often run from three to five seconds, as opposed to the days that banks could need to finish a wire transfer and the minutes or even hours that it might take for Bitcoin transactions to be validated.

The fees for Ripple XRP are likewise very low. On the Ripple network, a transaction only costs 0.00001 XRP.

Ripple can be used as a transaction platform by big businesses as well.

In fact, it has more institutional market adoption than most cryptocurrencies.

The Ripple network handles XRP-based transactions. However, it can also do the same for other cryptocurrencies and fiat currencies.

Usage of Ripple also comes with a few disadvantages, such as:

Cryptocurrencies are popular due to their decentralized nature, which removes power from financial institutions and governments,

Due to its default list of validators, the Ripple system is seen as somewhat more centralized than its counterparts.

The Ripple network is being sued by the United States SEC (Securities and Exchange Commission) for selling $1.3 billion in unregistered security offerings.

The complaint considers XRP as digital assets which have similar functions and benefits as regular securities offered by financial institutions.

Ripple is also said to have given away billions of XRP in exchange for non-cash benefits like labor.

Other cryptocurrencies like Bitcoin allow for mining activities. In contrast, XRP has a premined supply, most of which is held in escrow. Although regular release dates have been scheduled, it is still feasible that significant amounts could be introduced at inconvenient periods. This could negatively influence the value of XRP. 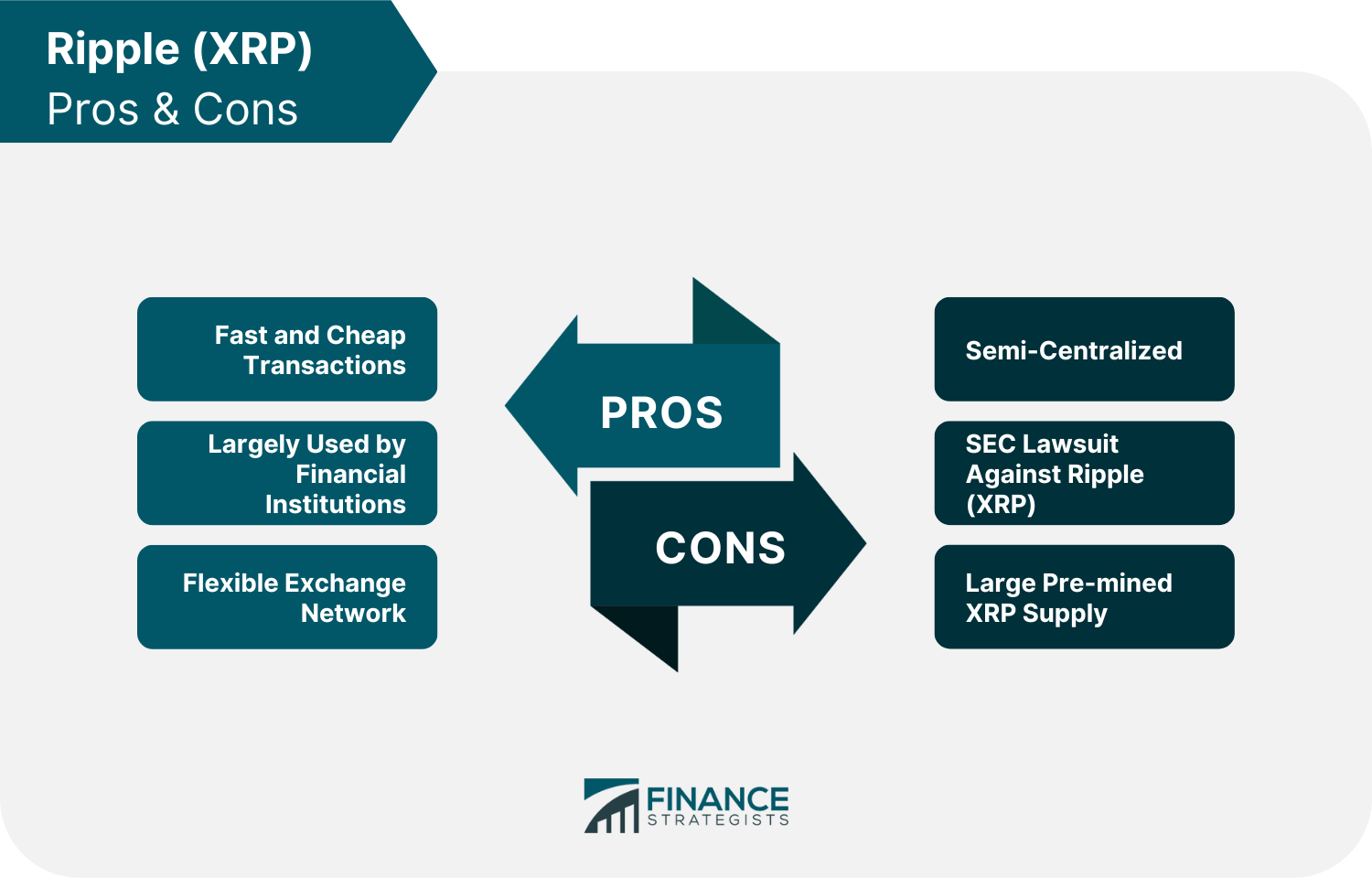 Similar to other significant cryptocurrencies, XRP achieved its highest point in 2018, when its value reached $3.37.

However, XRP was one of the worst-performing digital currencies in 2020, losing over 90% of its value from its high in 2018.

It is also the first cryptocurrency of its generation to use a distributed ledger of the blockchain variety.

The blockchain refers to a public database of confirmed transactions and recordkeeping, forming the foundation of the bitcoin network.

Transactions are continuously added to the Bitcoin blockchain after being verified by miners. Miners are rewarded with Bitcoin for successfully validating transactions in exchange for their time and the computational power required to validate the ledger in this manner.

In contrast, Ripple XRP is the world's sixth-largest cryptocurrency in terms of market capitalization.

It is cheaper and faster than Bitcoin. It does not allow for mining. Instead, it periodically releases XRP from those held in escrow.

Further differences between Ripple (XRP) and Bitcoin are summarized in the table below: 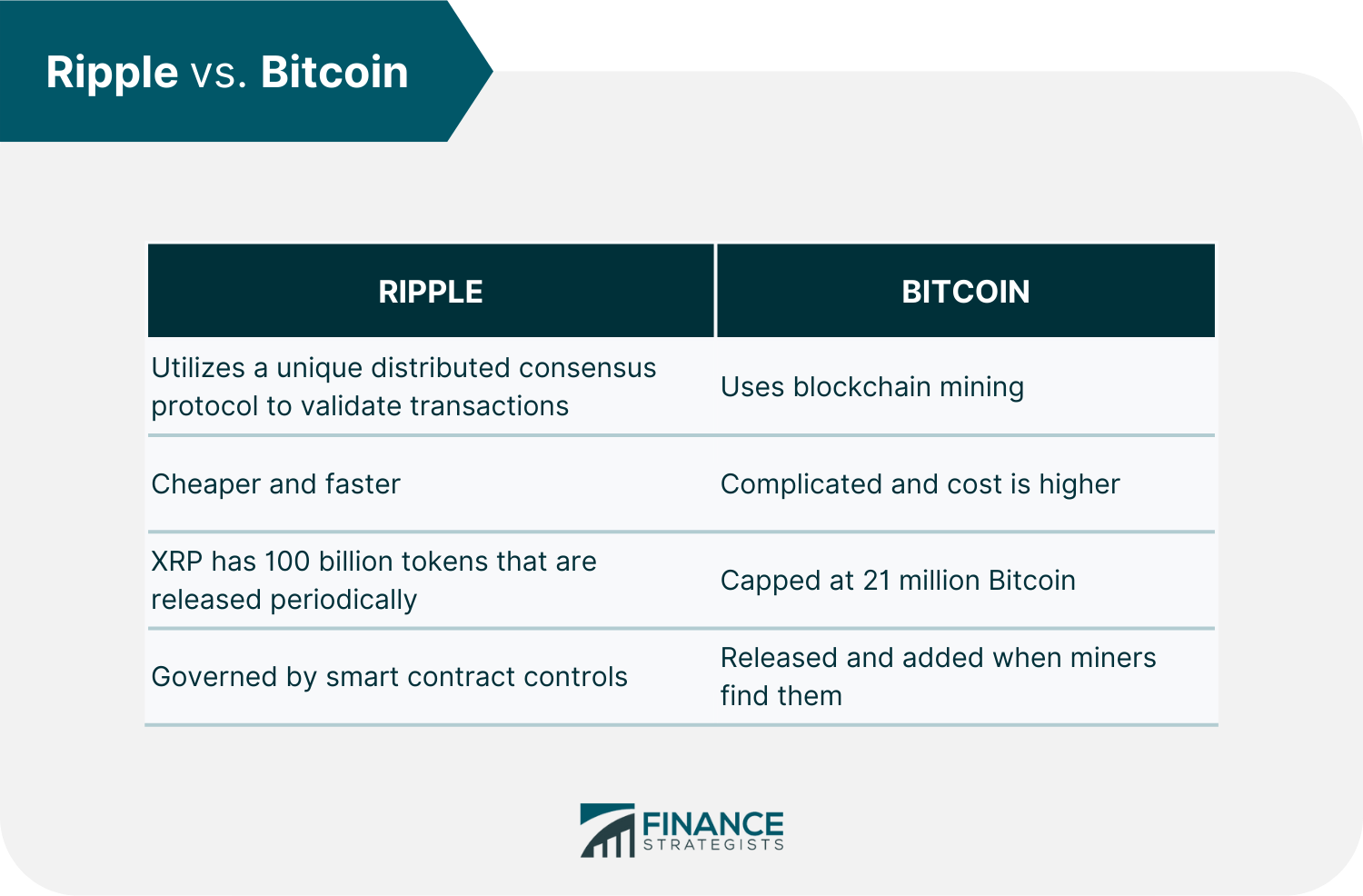 Ripple is a real-time gross settlement system that currency exchanges and remittance networks can use for quick and cheap international money transfers.

Ripple can work with both fiat currencies and cryptocurrencies.

Ripple has some big names on its side and is cheaper and faster than Bitcoin. However, it is viewed as a semi-centralized system and it is currently being sued by the SEC.

Over-all, investors should do their own research before investing in any cryptocurrency, including Ripple.

Should you invest in Ripple (XRP)

Even in comparison to other cryptocurrencies, Ripple's XRP token is a risky investment. It has been dropped by numerous well-known exchanges as a result of the SEC litigation. It has also drawn criticism from the cryptocurrency community since a private firm runs it. On the other hand, Ripple's potential is also apparent. It might replace an outdated and ineffective system for transferring money internationally. It has partnerships with several big banks. You may consider making a small investment in XRP if you think Ripple will continue to grow.

What can you do with Ripple (XRP)?

Ripple (XRP) can be used to make fast and cheap international money transfers. Ripple can work with fiat currencies and cryptocurrencies.

Is Ripple the same as XRP?

How do you buy Ripple (XRP)?

You can buy Ripple (XRP) on a cryptocurrency exchange. Some exchanges that offer Ripple include Bithumb, Binance, and Bitstamp. After purchasing, you should store your Ripple in a Ripple wallet.

What does Ripple (XRP) do?

As a form of temporary settlement layer denomination, Ripple functions as an intermediary exchange mechanism between two currencies or networks.