What Is Earnings Before Interest and Taxes (EBIT)?

Earnings Before Interest and Taxes (EBIT) is one of the various profitability metrics for businesses.

Although considered as non-operating items, interest and tax expenses are excluded from the calculation of EBIT for the purpose of gauging a company's profitability without the impact of its capital structure and tax expenses.

Often, EBIT is referred to as operating profit or operating income. This is true when there are no non-operating items to be accounted for.

For this reason, most resources on the matter do not make that distinction although it is important to understand that they are two different measures of profitability.

EBIT is a helpful metric in monitoring the ability of the company to earn enough to deliver profits to the business, pay down debt, and fund its daily operations.

Components of Earnings Before Interest and Tax

The components of EBIT are as follows:

Revenue is the total amount of money that a company brings in from its sales and other activities over a given period of time.

It is often calculated by multiplying the sales price by the number of units sold.

Revenue is also called sales or the top line in the income statement, where the COGS is subtracted to determine gross profit.

COGS include all direct costs associated with producing the goods or services that were sold. It involves direct labor costs, material costs, and manufacturing overhead.

COGS reveals how much a business had invested in its inventory that it sold throughout a certain period. It excludes those indirect expenses, such as sales force costs and distribution costs.

Non-operating items are further classified into non-operating revenue and non-operating expenses. These include proceeds from sale of extraordinary items, lawsuit expenses, and certain accounting adjustments. These items are added/subtracted from operating profit before EBIT is reached.

While interest and taxes are also non-operating items, they are excluded from the calculation of EBIT.

Formula and Calculation for EBIT

EBIT can be calculated by two methods:

The first method of calculation is more commonly used. The formula for EBIT can be expressed as: 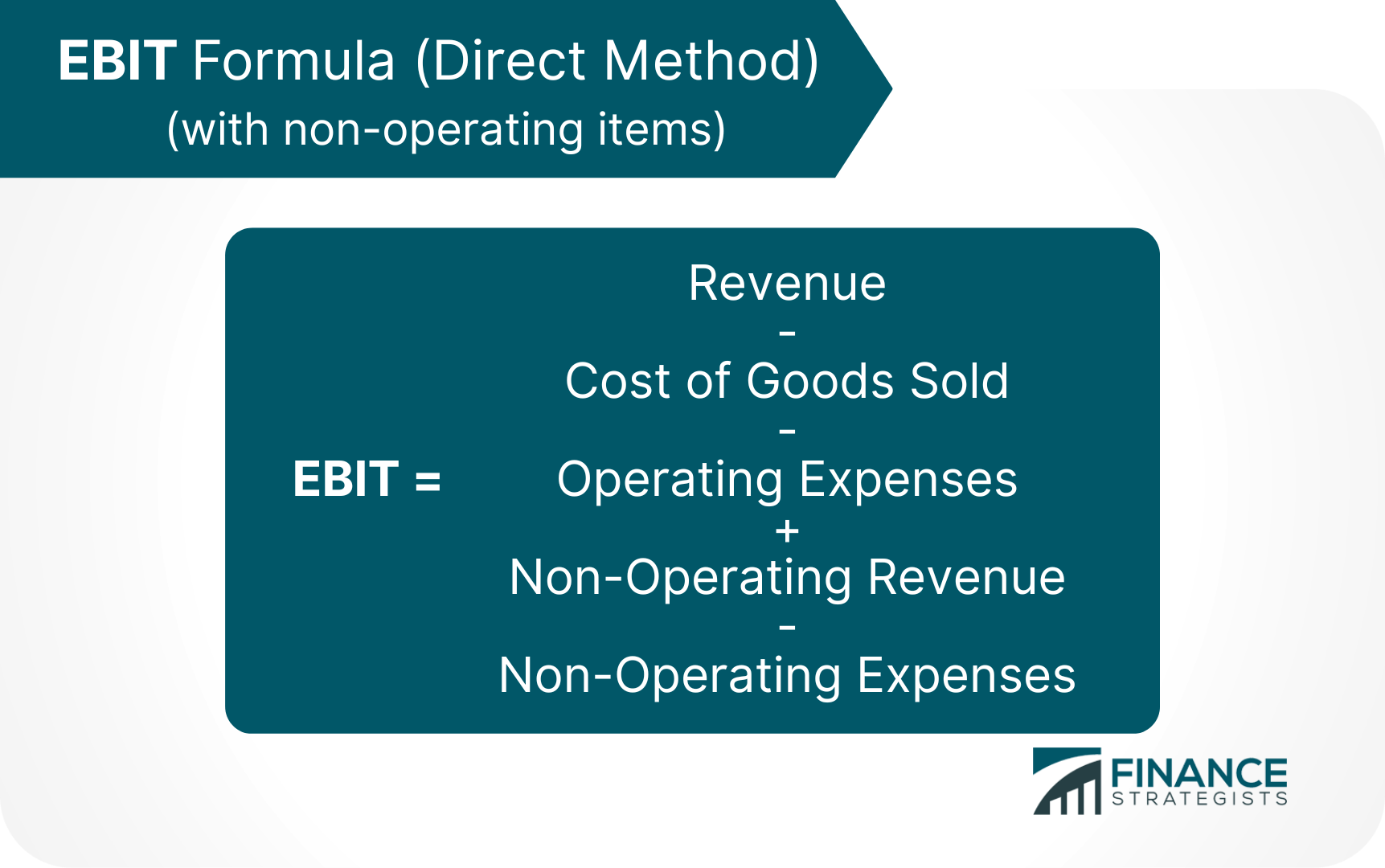 In instances where there are no non-operating items to account for, the formula can simply be: 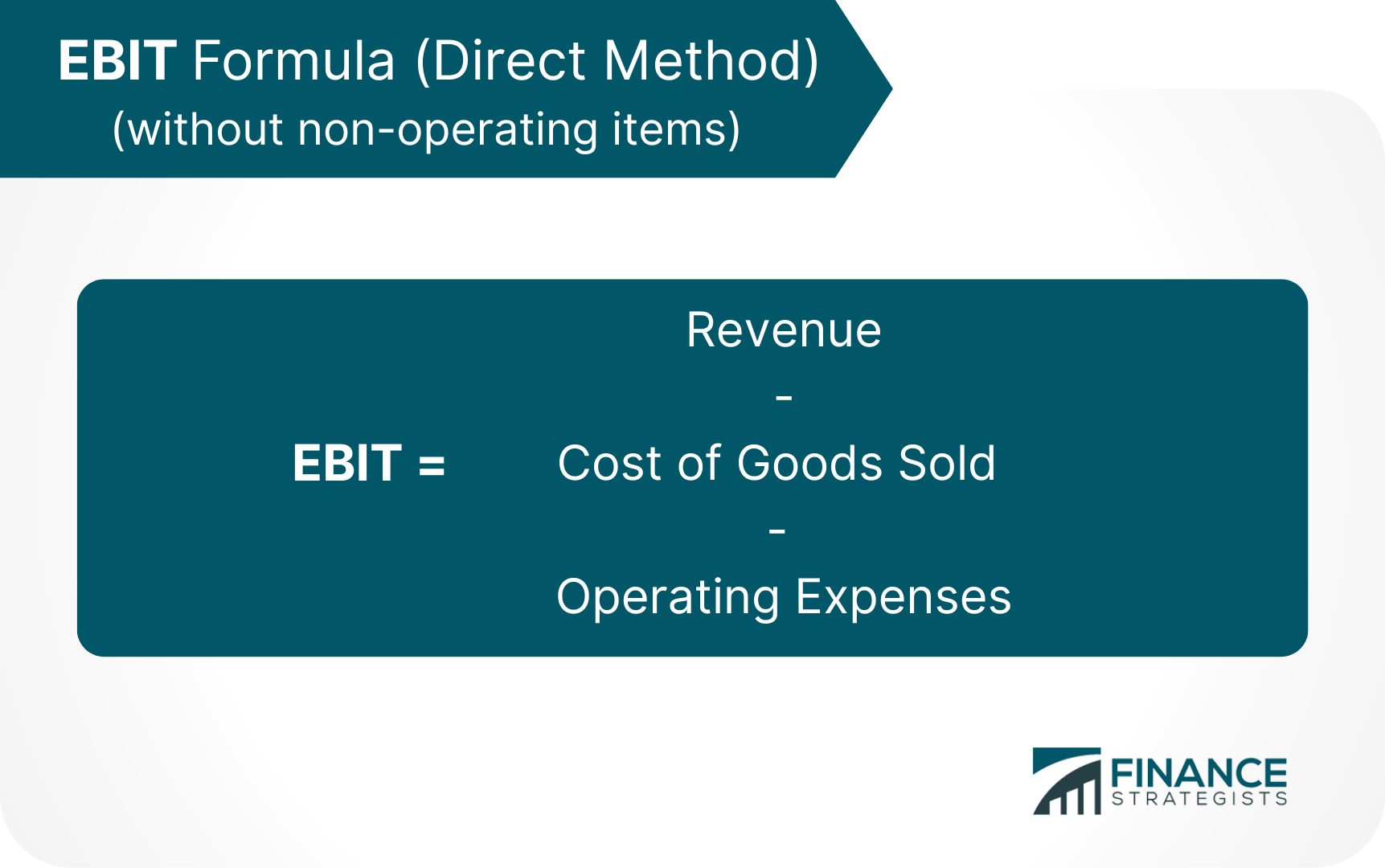 The resulting figure will be equal to operating profit.

This method shows directly what is taken out of earnings. This gives more of a preliminary operations point of view.

The formula for EBIT using the indirect method can be expressed as: 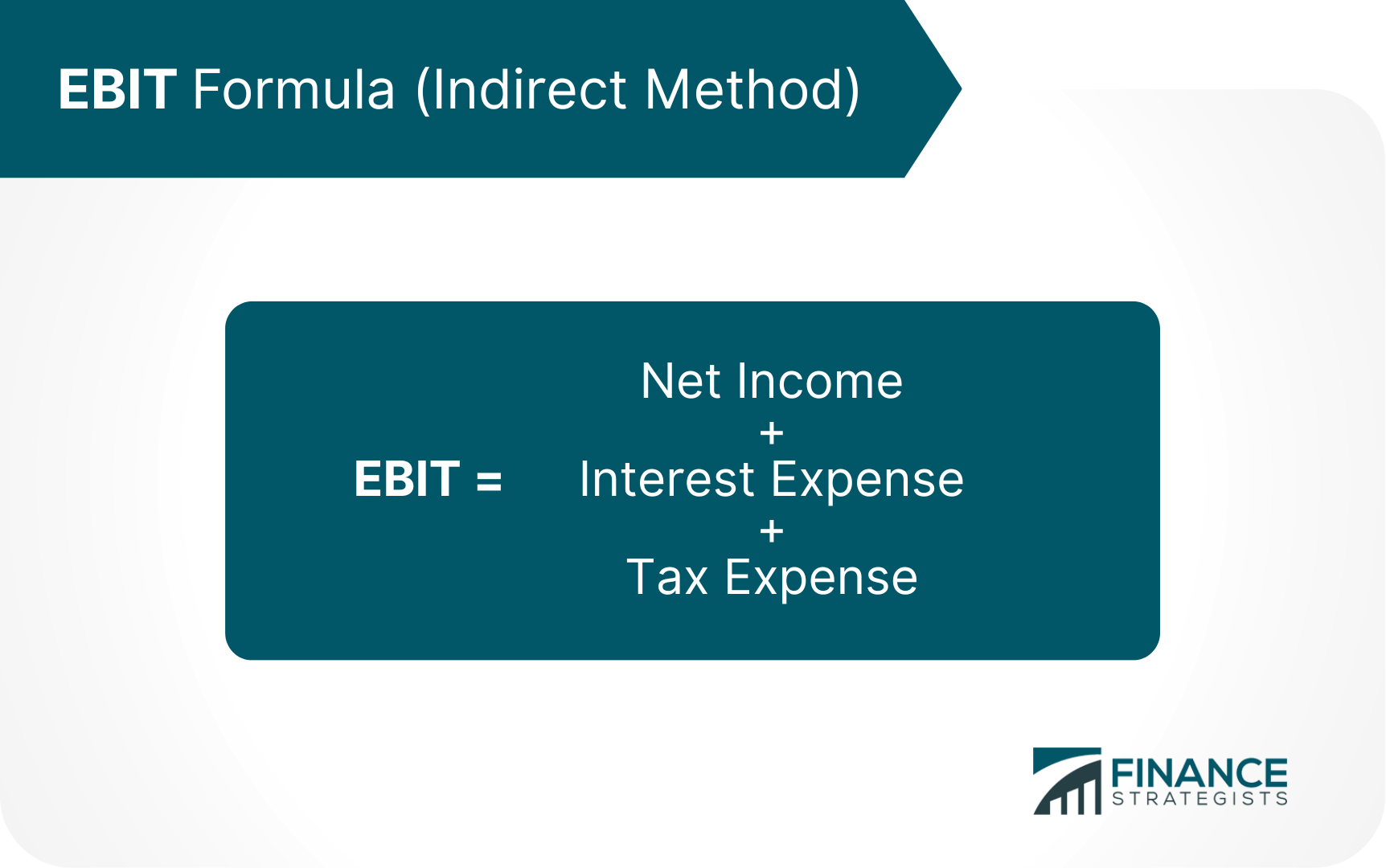 The indirect method begins with the net income of the company and adds back the interest and tax expenses.

This method is straightforward since these items are always displayed on the income statement. The indirect method gives an end-period profitability point of view.

Direct and indirect methods arrive at the same EBIT figure and allow business owners and investors to understand the profitability ratio from two different points of view.

For instance, ABC Company has the following revenues and expenses:

Using the direct method, we calculate EBIT as follows:

Using the indirect method, calculating EBIT will be:

Using either equation or method, the EBIT for ABC Company is $201,000.

Another example is the income statement of Nike, Inc. from the year ending May 31, 2021 (all figures in millions of USD): 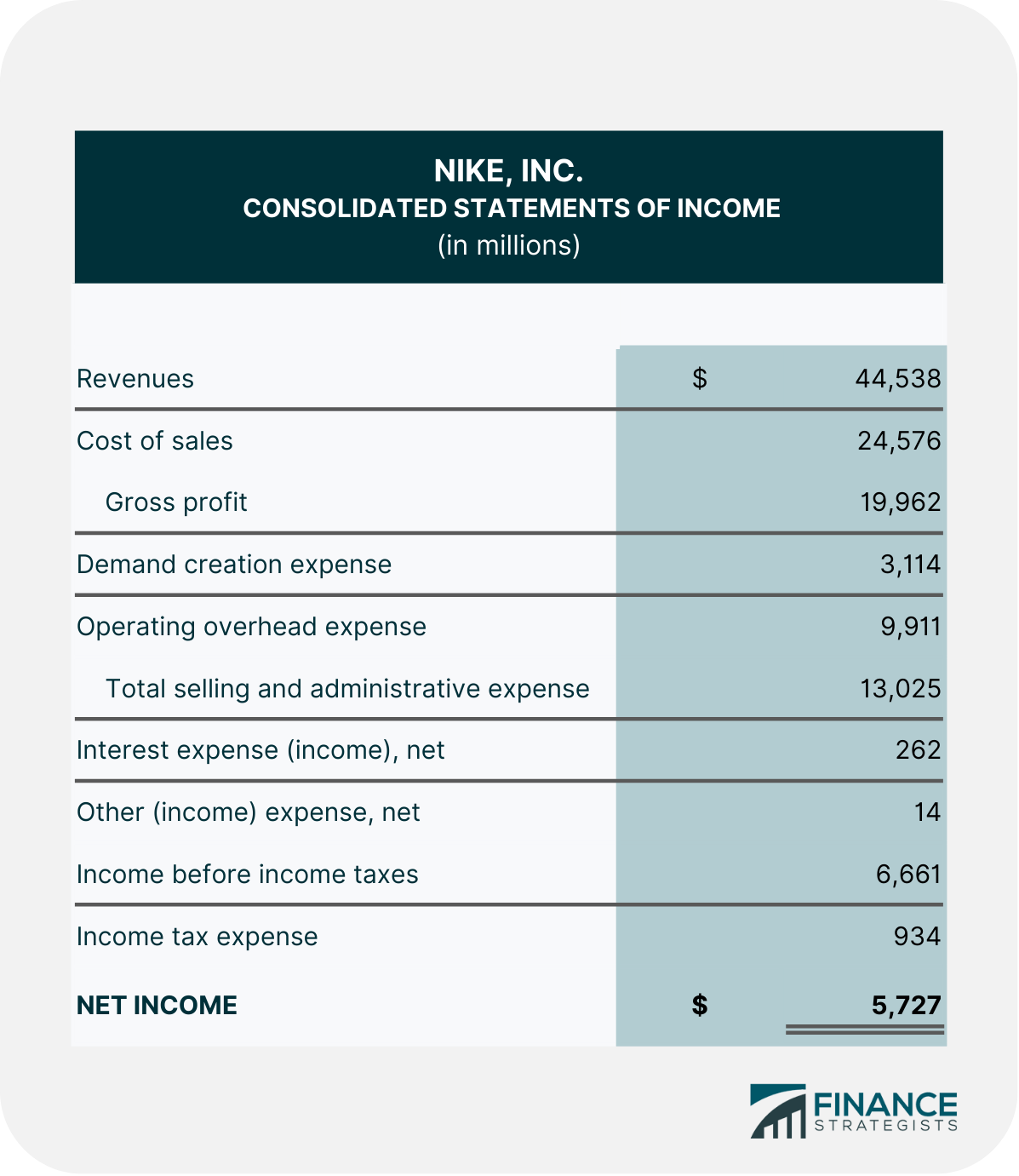 To calculate EBIT using the direct method, we subtract the cost of sales or COGS, total selling and administrative expense, and other expenses from revenues.

To calculate EBIT using the indirect method, we add income tax expense, and interest expense to the net income.

There are a number of advantages to knowing EBIT. Here are a few of them:

EBIT is a good indicator of how well a company is doing compared to its competitors. If two companies are in a similar industry and one company has a higher EBIT, this means that the company is more profitable.

When the company has a lower margin, an analysis of EBIT will reveal whether the lower margin is exclusive to the company only or is due to a slow down of the overall industry.

Other Metrics Depend On It

Business metrics, such as ratio analysis, depend on including EBIT in the calculation.

Creditors also closely monitor EBIT figures to give them an idea of pre-tax cash generation for paying back loans or debts.

EBIT is a good indicator of how well a company is run. A high EBIT margin indicates that the company has good operating efficiency.

There are also some disadvantages to using EBIT:

EBIT will exaggerate the earnings potential of a company while it also owes a large amount of debt or loan.

It will display a high cash flow based on EBIT alone, but in reality, that cash might be used to pay interest expenses.

Having a large number of fixed assets may give a company a lower present-day valuation compared to another company because of the depreciated value of fixed assets.

Here is a comparison table between EBIT and operating profit. 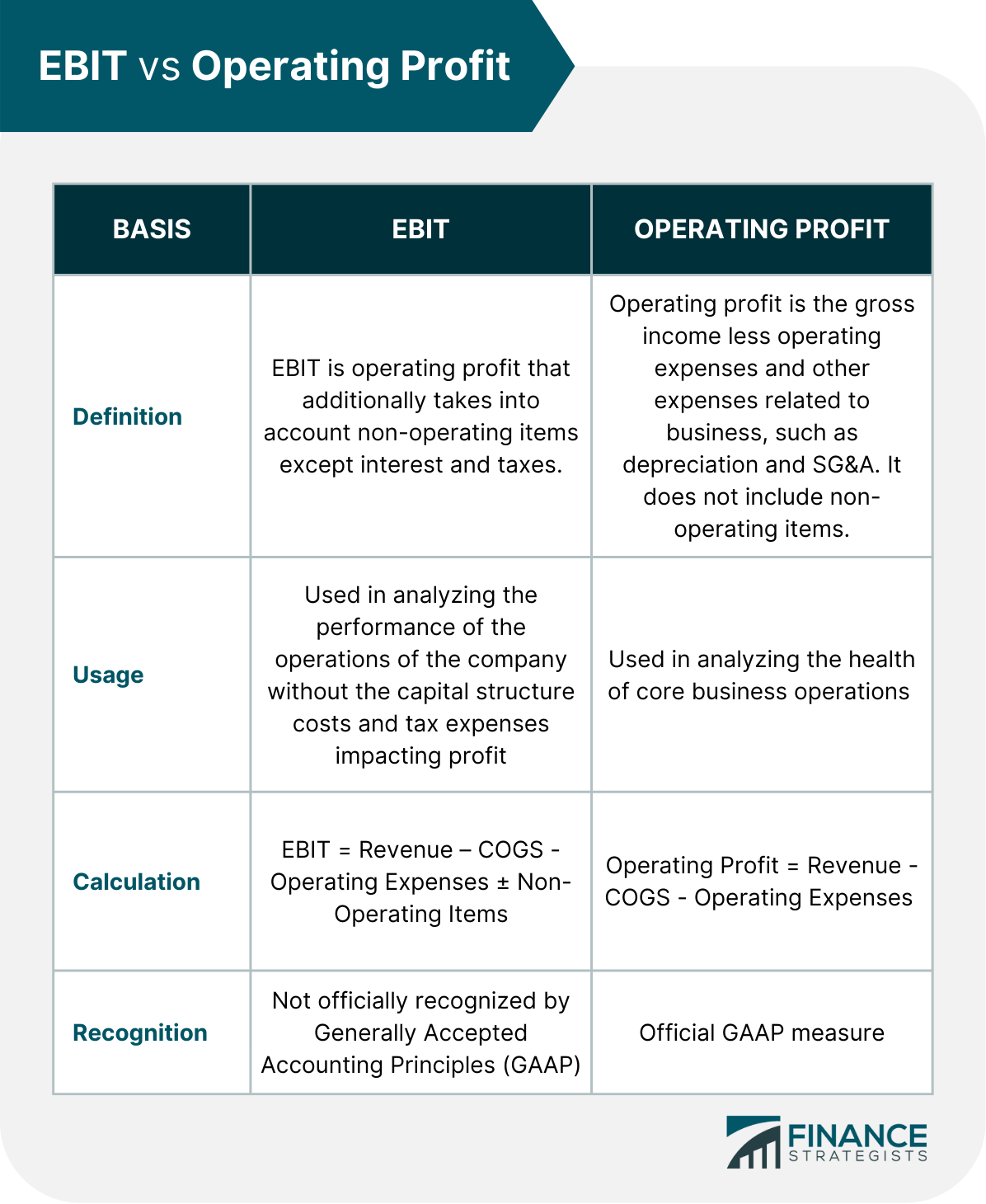 Both EBIT and earnings before interest, taxes, depreciation, and amortization (EBITDA) are ways of measuring the profits of a company. While closely similar, they also differ in some critical ways and fundamentally measure two different forms of income.

Here is a comparison table between EBIT and EBITDA. 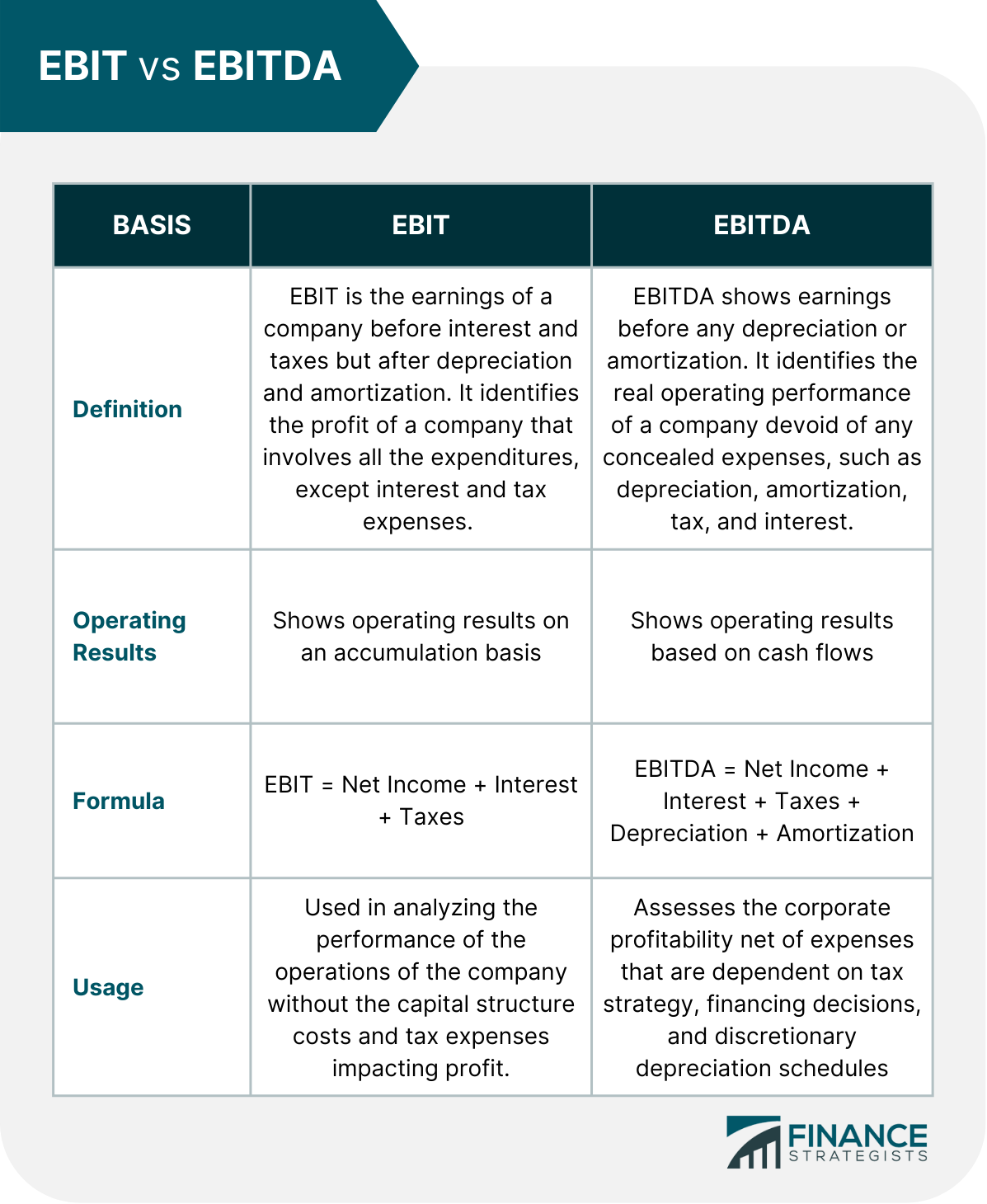 Earnings Before Interest and Taxes (EBIT) is a metric used to measure a company's profitability. It is calculated by adding interest and tax expenses back to net income.

The indirect method uses the net income of the company and adds back the interest and tax expenses.

Some disadvantages include that it excludes interest expenses and includes depreciation.

Excluding interest expenses will overvalue the earnings potential of a company while it also still owes a large amount of loan or debt.

Including depreciation also gives the company a lower present-day valuation compared to its competing company.

EBIT is a good profitability metric to use when analyzing a company. However, it is important to keep in mind its limitations. When used correctly, EBIT can give you a good idea of how profitable a company is.

EBIT is just one metric that can provide insights into a company's profitability. Thus, it is important to use a variety of metrics when analyzing the financial performance of a company.

Why do we look at EBIT?

EBIT is used in analyzing the performance of the operations of the company without the capital structure costs and tax expenses impacting profit.

What does it mean if EBIT increases?

When your EBIT increases, it also increases your bottom line or net profit. It also shows the lenders that you have a high ability to pay your debts. Using EBIT, investors can tell that your company can generate enough earnings to be profitable and fund its daily operations.

How is EBIT calculated?

How do analysts and investors use EBIT?

Analysts and investors use EBIT to assess a company's operating profitability. It is used to compare companies within the same industry because it eliminates the impact of a company's capital structure and tax rate. It also reveals whether the company generates enough profits and is able to fund ongoing operations.

What is the difference between EBIT and operating profit?

The core difference between EBIT and operating profit is that EBIT takes into account non-operating items (except interest and taxes), such as proceeds from sale of assets and litigation expenses, while operating profit does not.