Gross profit and net profit are two critical profitability metrics for any company. These metrics are essential to a business because it shows the profitability of a company at different stages.

Gross profit is the amount of profit left over after only subtracting the cost of goods sold (COGS) from the company's revenue. It evaluates how well the company manages its production, raw material costing, labor costs, and spoilage due to manufacturing.

Net profit reveals whether the company can make more than what it spends. It is helpful in deciding on business expansion and reducing business expenses.

Gross profit and net profit, along with operating profit, are levels of profitability that a company generates. They are all found in the income statement of a company and represent profit at different parts of the earnings process and production cycle.

Below we will discuss gross profit and net profit, explore their formulas, and highlight some key differences between the two.

What Is Gross Profit?

Gross profit is the profit obtained by the company after deducting COGS from sales revenue. Generally, it includes only variable costs, excluding fixed costs. It may also be referred to as gross income or sales profit.

Gross profit depicts how well a business can manufacture and sell its products or services. It is also used to determine the gross profit margin of a company.

The formula for gross profit is: 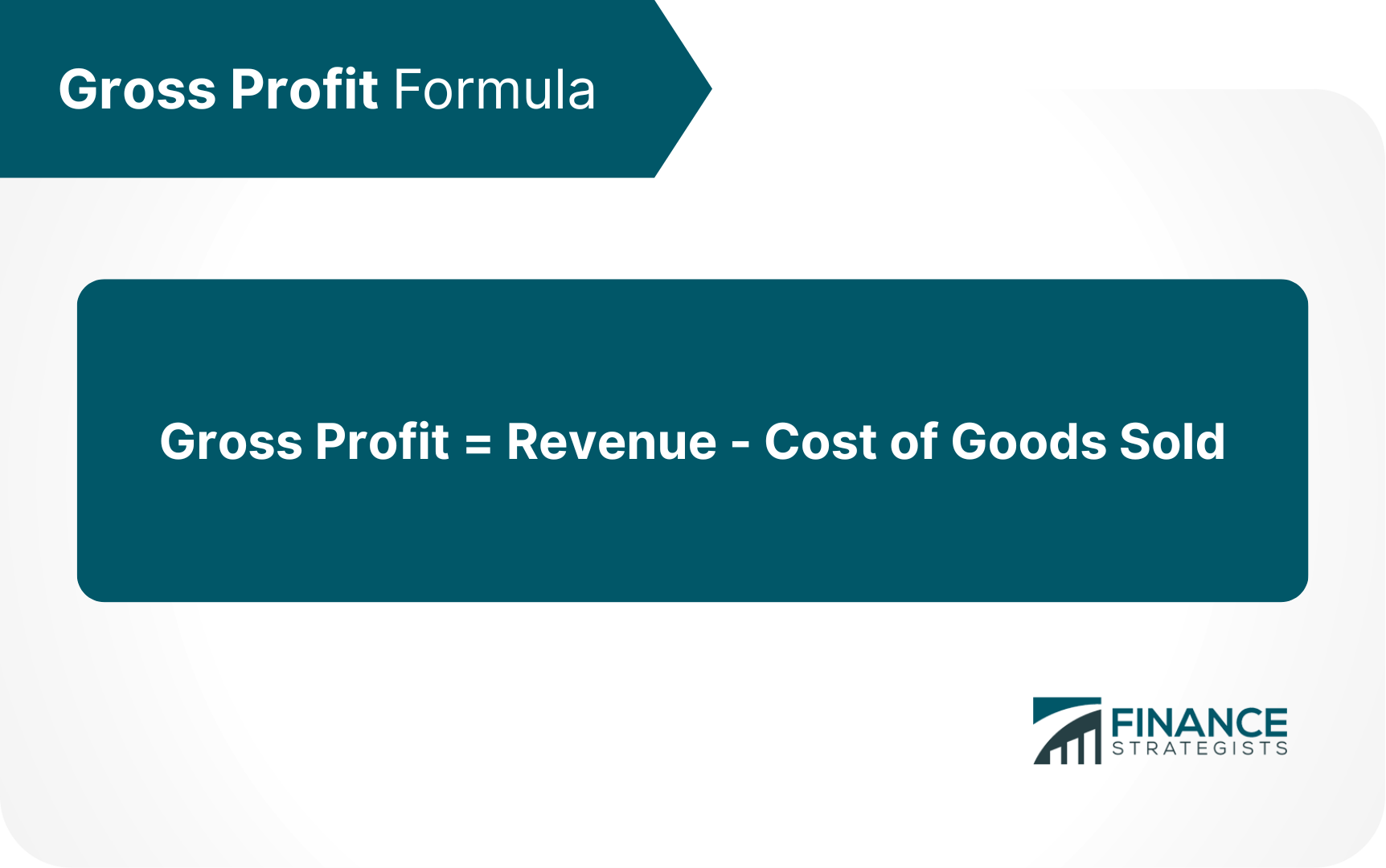 To calculate gross profit, we will use the revenue from normal business operations, which is operating revenue. Before COGS is deducted from this amount, sales returns, discounts, and allowances are first subtracted from revenue to arrive at the net sales.

The cost of goods sold is the direct cost of producing the goods sold by a company. It includes the material and labor costs directly used to create the good or produce its services.

COGS is also known as the "cost of sales."

COGS is subtracted from the revenue (net sales) to determine the gross profit of a company. It is recorded as a business expense on an income statement since COGS is the cost of doing business.

COGS is calculated by adding the beginning inventory and purchases and subtracting the ending inventory from it.

What Is Net Profit?

Net profit is the amount of money left after all expenses and taxes are deducted from revenue. It is often called the "bottom line" since it appears at the bottom portion of the income statement.

Additional income streams, such as short-term investments and the sale of assets, are also added to operating profit to arrive at the net profit.

The formula for net profit is: 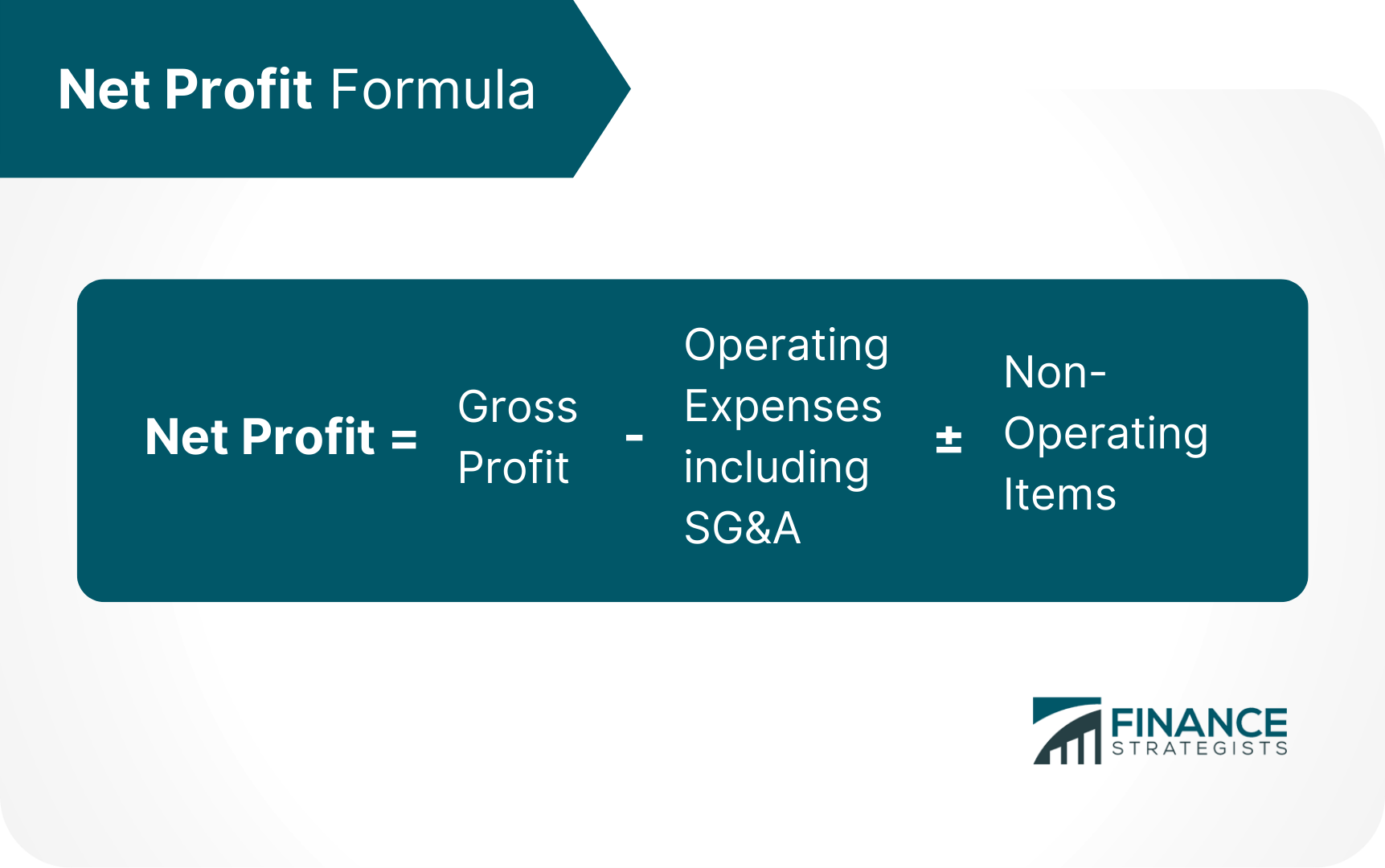 Operating expenses, often abbreviated as OPEX, are the costs incurred in running the day-to-day operations of a business. It typically makes up the majority of the expenses of a company.

Operating expenses are the residual direct costs that are not included in COGS. This can consist of utilities, rent, property taxes, salaries or wages, and business travel expenses.

Companies try to increase their revenue while keeping operating expenses under control.

The selling, general, and administrative expenses are the operating expenses that are indirect costs of production. SG&A covers all non-production costs.

SG&A is sometimes listed as a separate line item on income statements under the cost of goods sold, below expenses. However, it can also be lumped together with operating expenses when reflected in income statements.

SG&A expenses include legal expenses, accounting expenses, advertising and promotional materials, corporate office overhead expenses, including the salaries of corporate officers and administrative staff, rent, marketing and sales expenses, and supplies that are not included in manufacturing.

Non-operating revenue, or income from secondary sources, consists of income from the sale of assets that are no longer needed by the company, or from investments, such as bonds and stocks. These items are added to operating profit.

To understand the difference between gross profit and net profit, let us take a look at the income statement of Nike, Inc. for the period ending on May 31, 2022. 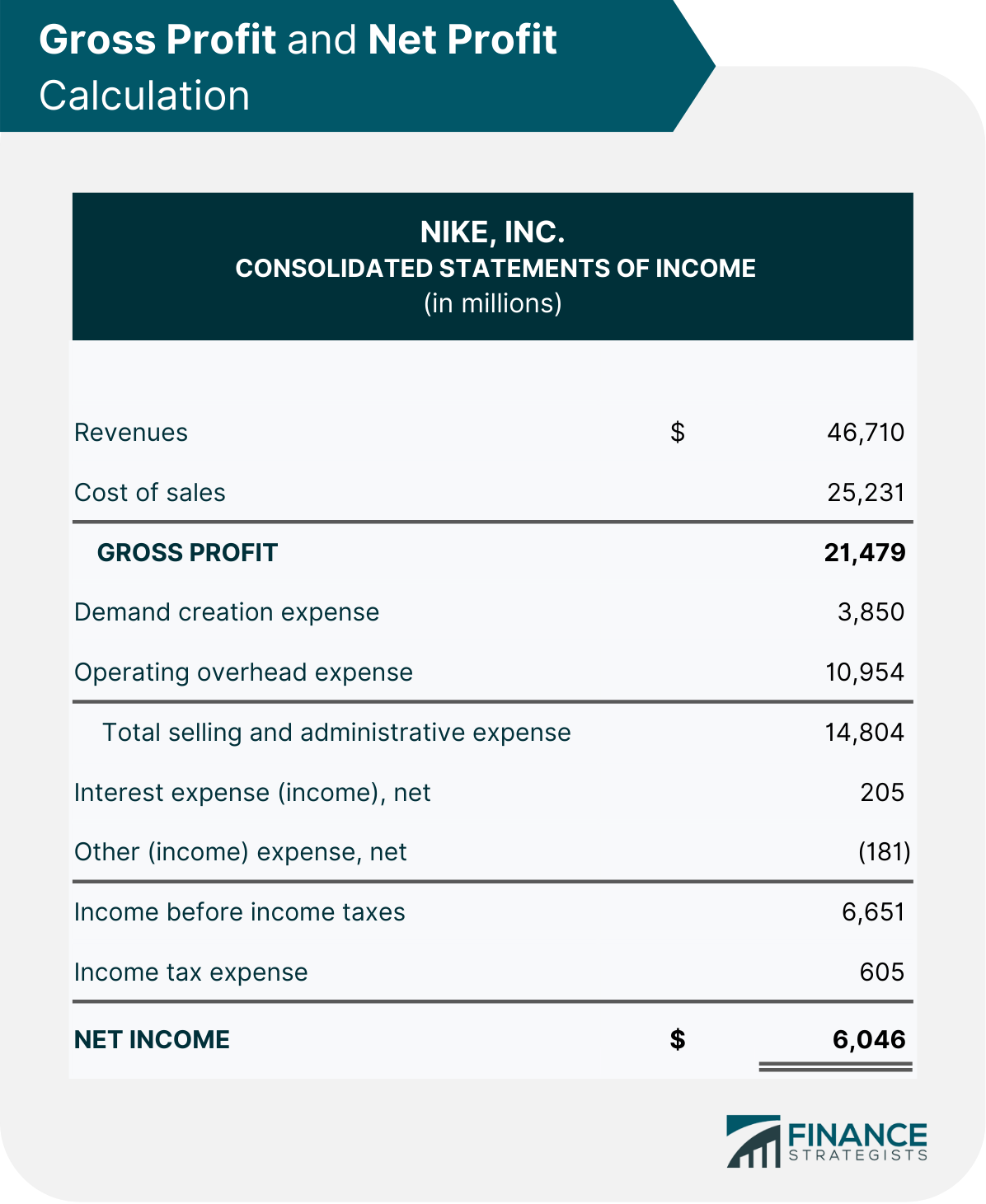 Summary of Differences Between Gross Profit and Net Profit

Here is a comparison chart of gross profit and net profit to highlight the key differences between the two. 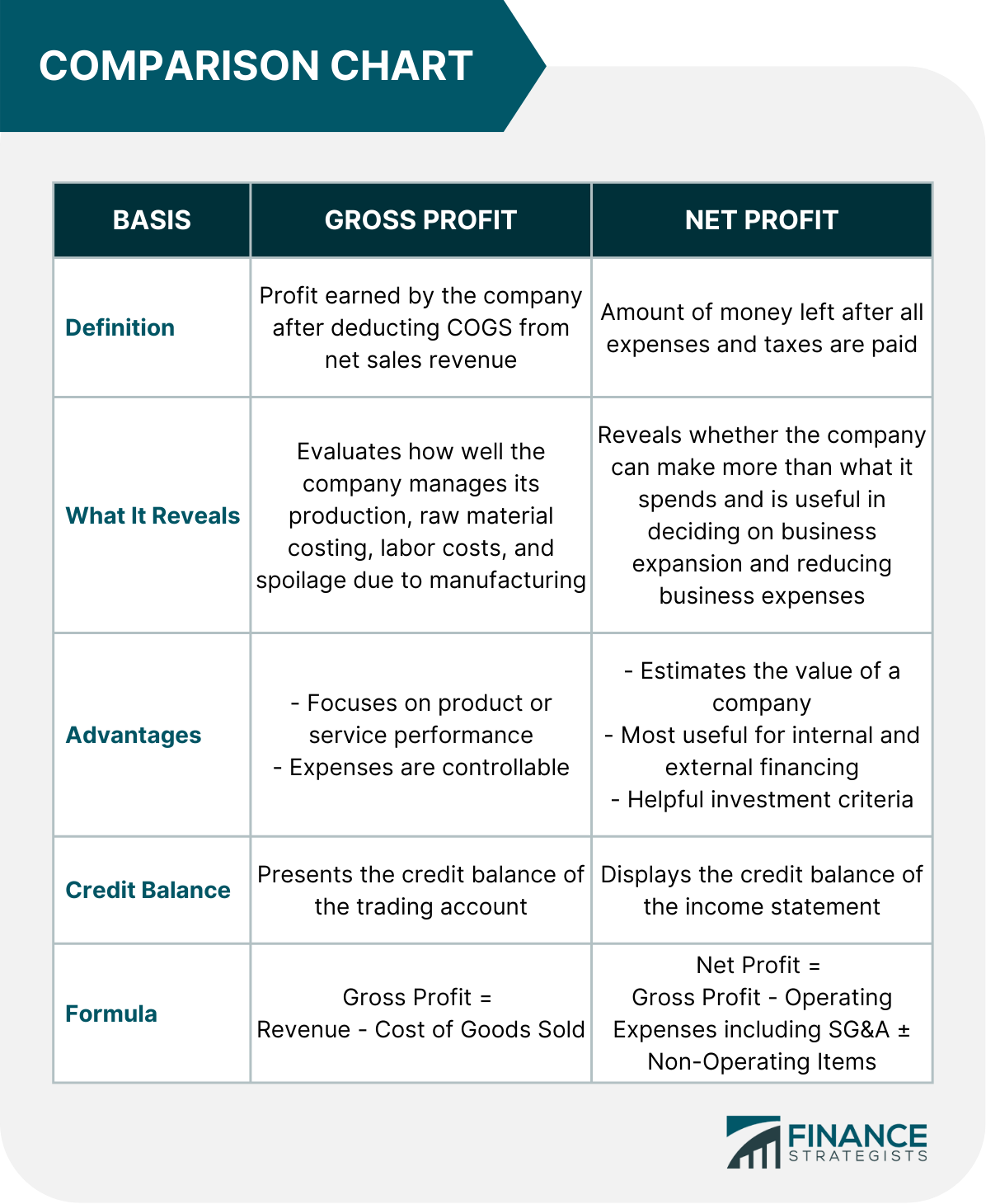 Gross profit is the direct profit left after subtracting the cost of goods sold from revenue. It does not take into account indirect costs and expenses incurred in running the day-to-day operations of a business.

Net profit is the final profit figure arrived at after all costs and expenses, both direct and indirect, have been accounted for. It is also referred to as the bottom line.

Both gross profit and net profit are important in measuring the profitability of a business. However, net profit is a more reliable measure because it takes into account all the costs incurred in running the business. Gross profit only focuses on direct costs.

Investors usually look at both gross profit and net profit when making investment decisions. However, analysts tend to focus on net profit when conducting fundamental analysis of a company.

Gross profit focuses on product or service performance and is more controllable, while net profit reveals whether the company can make more than what it spends. Net profit is also useful in deciding on business expansion and reducing business expenses.

Both gross profit and net profit are essential in measuring the profitability of a business. They provide insights into different aspects of a company's operations.

As such, companies should focus on improving both gross profit and net profit figures.

Is net income and net profit the same?

Net income and net profit are the same single number that represents a specific type of profit. They are the bottom line on an income statement.

Why is net profit called The Bottom Line?

Net profit is called the bottom line because it represents the final profit figure after all costs and expenses, both direct and indirect, have been accounted for. It appears at the bottom part of an income statement.

What is the difference between revenue and profit?

Revenue is the total amount of money that a company brings in from its sales. Profit is the portion of that revenue that is left after expenses have been paid.

What is the difference between gross profit and net profit?

Gross profit is the difference between sales revenue and cost of goods sold. On the other hand, net profit is the final profit after all expenses and incomes of the business are accounted for.

Why is it important to know the difference between gross profit and net profit?