A regressive tax system is a type of taxation that takes a larger percentage of income from low-income earners than from high-income earners.

It is the opposite of a progressive tax system, which takes a larger percentage of income from high-income earners than from low-income earners.

There are several types of regressive taxes, including sales taxes, payroll taxes and property taxes.

Sales tax is a regressive tax because people who have less money can afford to buy fewer items on which the tax is imposed -- called "taxing away the bottom." The same holds true with a value-added tax.

Sales taxes, however, are only imposed in a minority of the states and localities, and consumers usually pay most or all of that tax when they buy goods. Property taxes and payroll taxes (which are deducted from income) are regressive because these kinds of taxation do not take into account how income earners manage their money.

While sales tax is paid for by both rich and poor people, it is more of a burden to the poor because a greater percentage of their income goes towards buying necessities, which are taxed at a higher rate.

There are several advantages and disadvantages of regressive tax systems: 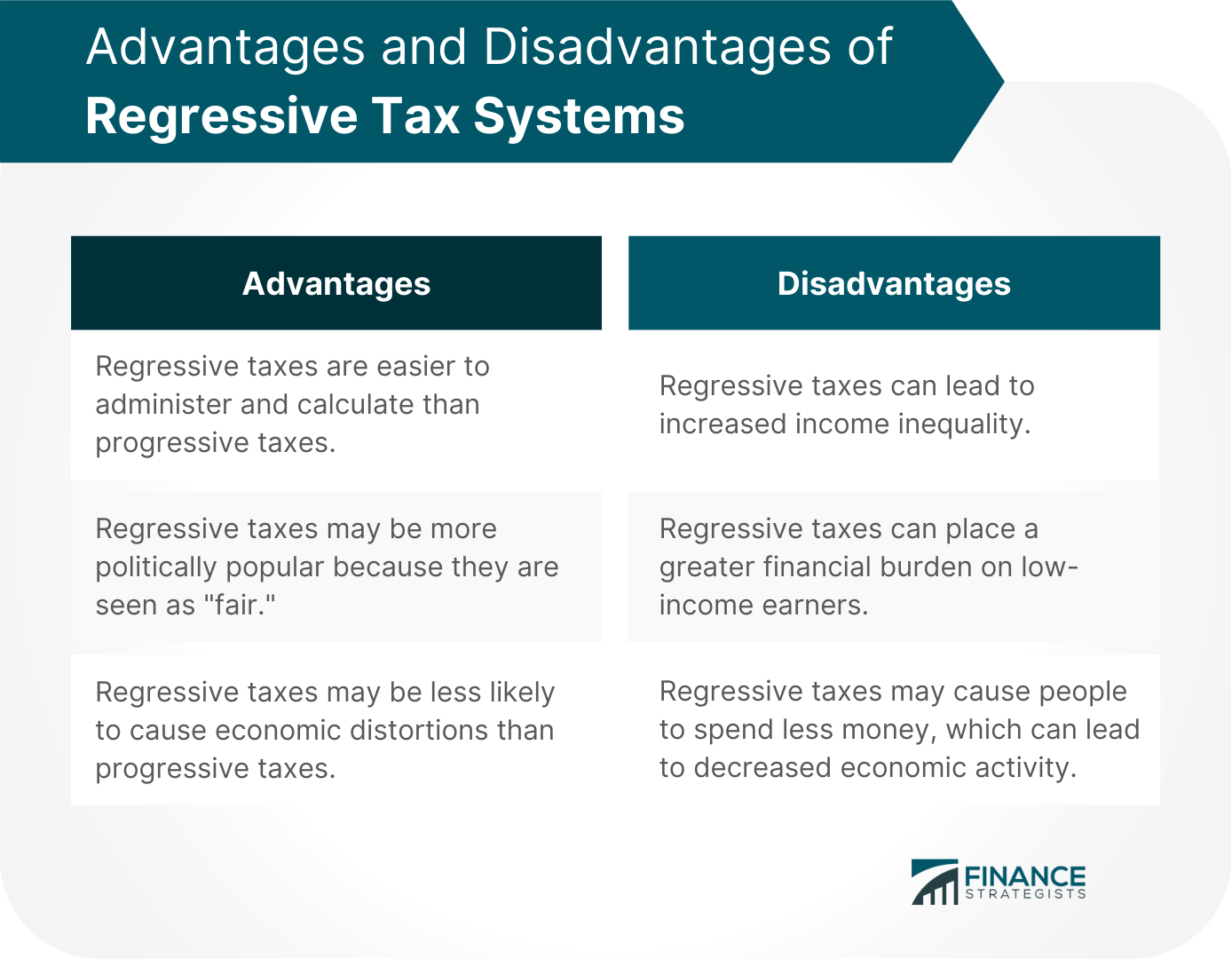 A flat or proportional tax rate is considered neutral since everyone pays the same rate. This restricts the amount of revenue that the government can collect, which is one reason why most countries have a progressive tax system. The more money a person makes, the higher percentage of income he pays.

There are many different types of taxes, from regressive to progressive.

A person must consider how a certain type of tax affects the economy and the country before deciding how it should be implemented or used.

What is a regressive tax system?

What are the types of regressive taxes?

There are several types of regressive taxes, including sales taxes, payroll taxes and property taxes.

What is a flat tax rate?

A flat tax rate is considered neutral, since everyone pays the same rate. This restricts the amount of revenue that the government can collect, which is one reason why most countries have a progressive tax system. The more money a person makes, the higher percentage of income he pays.

What are the benefits of a regressive tax system?

What are the disadvantages of a regressive tax system?

There are several disadvantages of a regressive tax system, including that it can lead to increased income inequality. It can place a greater financial burden on low-income earners and it may cause people to spend less money, which can lead to decreased economic activity.