Quick Ratio is also known as the acid-test ratio or liquidity ratio.

It measures the ability of a company to meet its short-term financial obligations with quick assets.

It is mostly used by analysts in analyzing the creditworthiness of a company or assessing how fast it can pay off its debts if due for payment right now.

Quick assets refer to assets that can be converted to cash within one year (or the operating cycle, whichever is longer).

The quick ratio is useful when analyzing a company's liquidity position.

This means it may suffer from illiquidity which could lead to financial distress or bankruptcy. In addition, considering companies in similar industries and sectors might provide an even clearer picture of the firm's current liquidity situation.

The quick ratio is calculated by taking the sum of a company’s cash, cash equivalents, marketable securities, and accounts receivable, and dividing it by the sum of its current liabilities.

In an equation, it is illustrated this way: 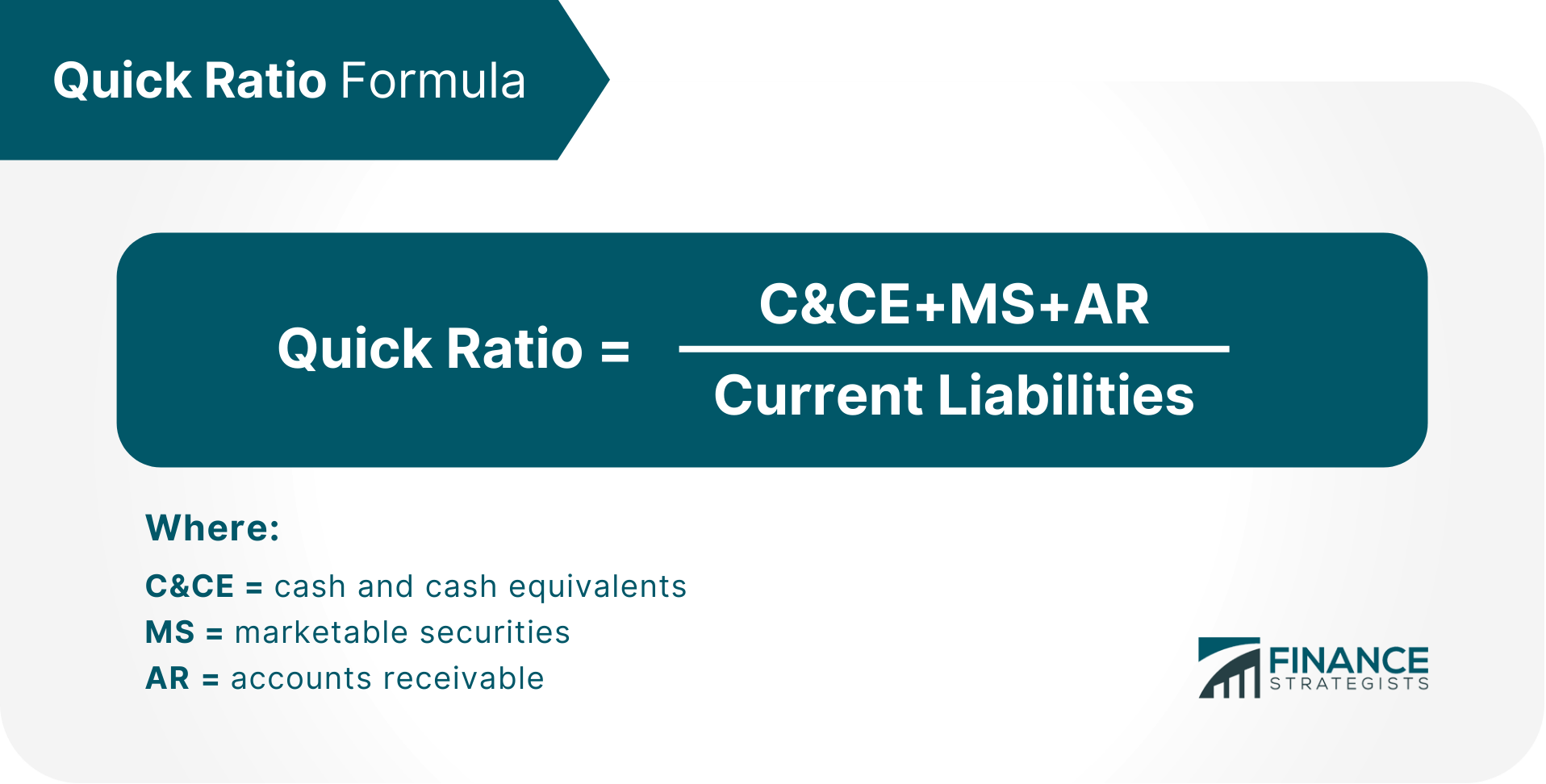 For example, say that a company has cash and cash equivalents of $5 million, marketable securities worth $3 million, and another $2 million in accounts receivable for a total of $10 million in highly liquid assets.

The company has $5 million in current liabilities.

To solve for the quick ratio, we use the solution below:

The quick ratio in this example is equal to 2.

What Is a Good Quick Ratio?

Higher ratios indicate a more liquid company while lower ratios could be a sign that the company is having liquidity issues.

Ideally, most companies would want to have a quick ratio of 3 or higher. However, some industries have a much higher quick ratio requirement such as the technology sector which can be as high as 10 or 12.

The quick ratio alone does not give the full picture of a company’s financial health and should be considered alongside other metrics, such as the earnings-per-share or rate-of-return on investments.

The quick ratio is a simple calculation that can be easily determined using the financial statements of a firm.

It only considers readily available assets and may not take into account other factors such as future prospects, timing of transactions, etc.

The quick ratio is ideal for short-term creditors who want to know how quickly they will be paid back if the company were to go bankrupt.

Quick Ratio is not a perfect measure of liquidity. It does not take into account factors such as long-term debt and depreciation which can also affect a company’s liquidity position.

In terms of accounts receivables, the quick ratio does not take into account the turnover rate or the average collection period.

For example, a company can have a huge amount of accounts receivable that will eventually cause a higher quick ratio. But because it does not take into account how long the accounts receivable will be realized as cash, it may still affect the liquidity of the company in a negative way.

The quick ratio only considers readily available assets which means it cannot be used by companies that have significant amounts of fixed assets such as real estate or equipment.

It also does not provide information regarding the value of its inventory and marketable securities.

Also, if there are other businesses that may be affected in case of bankruptcy, then this could impact whether any claims would be paid back in full or just partially. The same is true for contingent liabilities such as tax filings and litigation matters.

In conclusion, the quick ratio is a key liquidity metric that measures a company's ability to meet its short-term financial obligations. It is important for analysts to consider when assessing a company's overall health.

While the quick ratio is not a perfect indicator of liquidity, it is one tool that analysts use to get a snapshot of how well a company can meet its short-term obligations.

What does the quick ratio tell me?

The quick ratio tells you how easily a company can meet its short-term financial obligations. A higher ratio indicates a more liquid company while a lower ratio could be a sign that the company is having liquidity issues.

Why is it important for a company to have a high quick ratio?

The quick ratio is an indicator that measures a company’s ability to meet its short-term financial obligations. It can help reassure creditors and therefore interest rates they may charge could be lower compared to other companies with lower ratios.

When should you not use the quick ratio?

The quick ratio should not be used by companies that have significant amounts of fixed assets, such as real estate or equipment. It also does not provide information regarding the value of its inventory and marketable securities.

Is the quick ratio perfectly reliable in all situations when looking at a company's liquidity?

No, the quick ratio is not a perfect measure of liquidity. It does not take into account all aspects that can impact a company's liquidity position. Thus, it should be considered alongside other metrics, such as the earnings-per-share or rate-of-return on investments.

Cash equivalents are assets that can be quickly converted into cash, such as short-term investments or accounts receivable.