What is Yield Rate?

Yield rate is the net profit an investment earns expressed as a percentage of the investment. It measures the amount of income generated by an investment over a specified period.

When you invest your money, you want to make sure that it generates more than what it costs to buy and upkeep.  When buying investments such as stocks, bonds, or real estate, there will be regular fees or maintenance costs associated with them.

These costs must be subtracted when determining the yield of an investment.

Why Are Yield Rates Important?

Yield rates are important because they give you an idea of how much money your initial investment will make over a set time period.

It is one way to measure an investment’s success (or failure) and whether it's worth the cost of buying in. For example, if investment costs $100 and you make $20 in the first year, your yield rate for that one year would be 20%.

If another investment costs $100 but only makes $15 after a year, it might not seem so attractive.

However, if both investments cost the same amount over time (for upkeep or fees), they are equal despite having different initial rates of return.

How Do You Calculate a Yield Rate?

To calculate yield rates, you first need to find out how much money the investment is making.

Then you'll want to take that number and divide it by what your initial cost was for buying into that particular investment.

It will give you a percentage rate of return on the amount invested over time which can be used as an indicator if they're worth getting involved in or not.

Yield rates are usually expressed with percentages. Below is the formula: 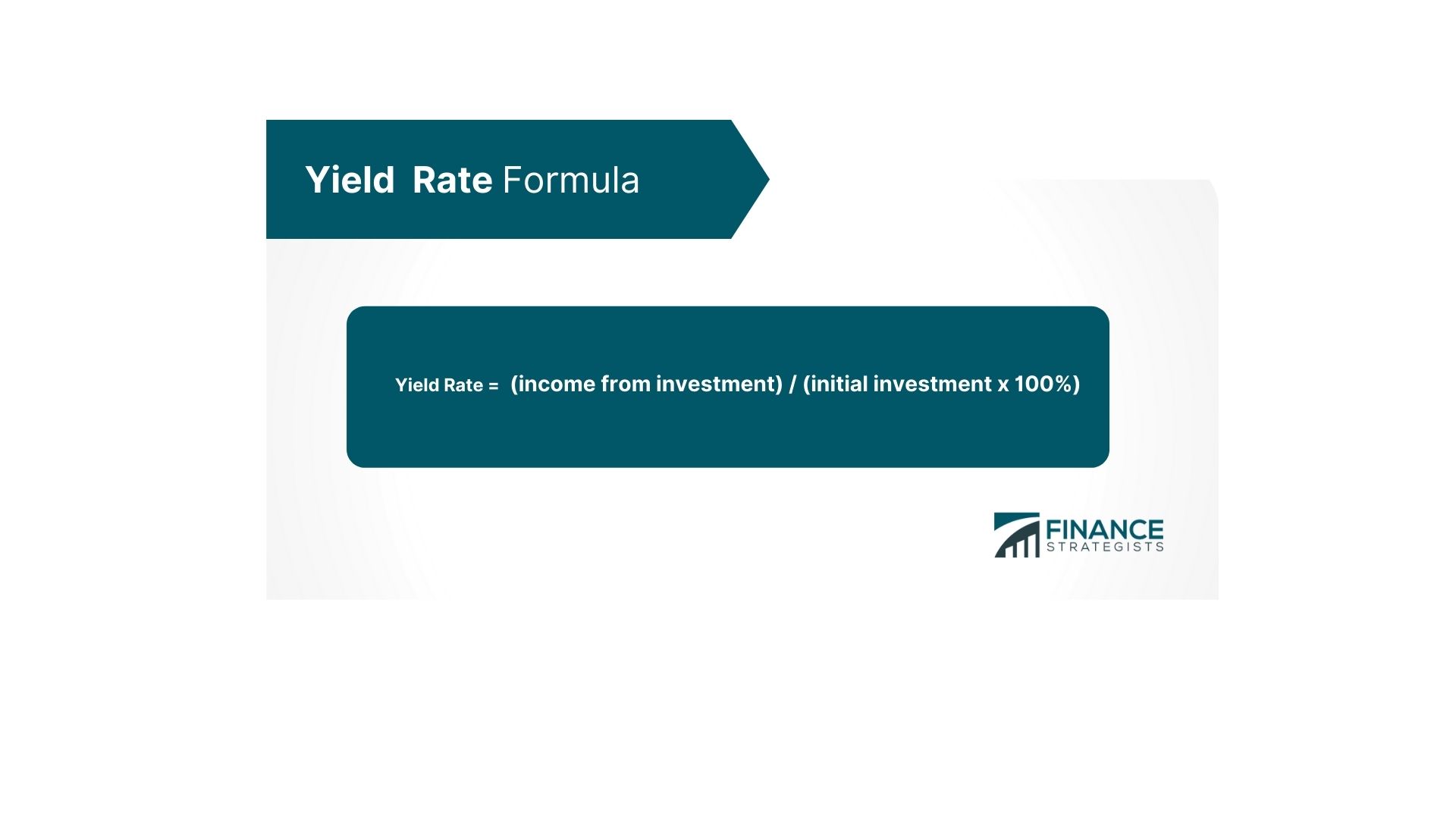 In investing, yield rates are a vital part of considering any new investment.

In fact, they're used as the basis for all sorts of financial calculations, including assessing risk and deciding whether or not to buy into something that might be worth it or too costly.

However, this goes beyond simply looking at what a specific yield rate is.

When buying an asset with income potentials such as stocks or bonds, you need to find out how much your initial cost will be on top of those regular upkeep fees.

Finding out the initial cost will help you see if there's going to be enough money generated by the investments themselves over time (taking into account their effects).

High yield rates on your investments can be a good thing because it means more money is being generated than what you originally put in.

High yield rates would raise the value of any assets that are bought with those funds and help propel them to new heights.

However, there are some instances where investors will look for lower yield rates so they can invest in something that would be cheaper to get involved.

If an investment is cheap enough, there might not be enough money being generated by it over time which means the initial costs of buying into that asset may have been too much or just unnecessary altogether.

When talking about yield rates and any investments associated with them, the main thing you need to keep in mind is whether or not what you're getting out from investing more than makes up for what it's putting in. For example, let's say you decide to open your own coffee shop but have no idea if this will work out.

You have a few hundred dollars set aside to invest in supplies and equipment, but you are not sure if it is going to be enough or whether the location you have chosen is a good one for your business at all.

In this case, finding out what yield rates are on coffee shop investments could be helpful. There would likely need to be more money being put into those funds than made from them over time as upkeep fees and other costs went up that wasn't planned initially.

If the return rate was low enough, then opening that kind of business might not even make sense which means looking elsewhere entirely should happen first before deciding anything else about starting a new venture like this one.

Yield rates are a useful way to see if an investment is worth getting into or not. Not only because of the money they might make but also for how much it costs you in comparison.

Yield rates can help give you more insight into whether any given asset is right for your situation or not. The final thing to keep in mind is that yield rates aren't the only way of looking at things, and they may not even be a big factor, depending on what you're investing in.

However, it's still important to consider them as one indicator of whether or not something might work out well down the line.

What are yield rates?

Yield rates are expressed as percentages and can tell you how much money is being generated from investments over time. This information gives investors a better idea of whether or not what they're putting their hard-earned money into will be worth it.

Why are yield rates important?

Yield rates help investors see if certain assets will be worth it or not. If these figures show that more money is being put into an investment than what's coming out of it, then the asset may not be a good one to invest in at all. On the flip side, high yield rate investments may be worth it because of how much they can generate over time.

How do you calculate a yield rate?

To figure out the yield rates on investment, simply take this formula: yield rate = (income from investment) / (initial investment x 100%)

What determines the yield rate?

The yield rate of an investment can be affected by many different variables. Some of the most important is what type of asset it is, how much money you put into that asset initially, and whether or not your assets generate enough income to pay for themselves over time.

What is the difference between yield and return?

Yield rates are different from return rates because they tell you how much money is being generated by the investment over time. On the other hand, return tells you about any gains or losses that have happened with your investments in a given period of time.