A trend can be seen over the long run when successive upward or downward movement happens, referred to as a bear market or a bull market.

A bull market is a rising market in which economic conditions are typically favorable. This market is generally believed to be one in which markets continue to rise over time without falling by more than 20% from their previous peak.

Bull markets may persist for several years. The longest bull market lasted for around 11 years, from 2009, during the end of the Great Recession, to 2020, the start of the COVID-19 pandemic.

Investors frequently believe in the market's resilience and future performance during a bull market. So, they typically increase their stock purchases and hold onto their investments.

A bear market happens when the economy is receding, and the majority of stocks are experiencing value declines.

When a market is in a situation where a decline is anticipated or when it has already fallen by around 20% from its peak, it is said to be in a bear market.

Investors frequently have pessimistic views of the stock market and may have anxiety over their portfolios during a bear market.

Their concerns may lead them to sell their stocks, keep their cash on hand, and look for alternate investments such as bonds, precious metals, real estate, or money market funds—instead of stocks.

When someone is bullish, they anticipate price increases over a specific time frame.

The term can refer to asset classes like real estate or commodities and individual stocks, as well as broad market indexes such as the S&P 500 and specific industries.

It could be helpful to visualize a charging bull raising its horns to keep in mind what it means to be a bullish person who anticipates higher prices. A bullish investor, for example, believes that the share price of XYZ Corp. will increase.

Being bearish entails anticipating a long-term decline in prices. This term can be used to characterize the forecast for any financial asset, whether specific stocks like Tesla or stocks as a whole.

Think of a bear clawing down on its prey to help you recall that "bearish" refers to falling prices.

An individual is thought to be "bearish" about XYZ Corp. if they believe the stock will drop soon.

Investors who expect a market-wide decline in stocks, bonds, currencies, commodities or alternative investments like collectibles are considered bearish since they believe the decline will be prolonged and significant.

Origins of Bullish and Bearish

Rather than implying general confidence about prices and trend lines, the name "bull" initially referred to speculative purchases.

Later, as the years passed, the term eventually came to refer to the person making the investment. It has since evolved to include everyone's perception of price increases.

Although etymologists disagree on this term's precise origin, it most likely originated as a counterpunch to the term "bear." Although there are numerous explanations, this is the most widely acknowledged origin of the term "bull market."

The bull's natural attack style, where it sweeps its horns upward in the same direction that optimistic investors anticipate the market to move, may be the most generally reported possible source for the term.

On the other hand, it is possible that both parables and actual events inspired the name "bear market." It has been associated with 18th-century commerce in bear skins. In an early case of short selling, fur traders sold bear skins that they had not yet captured,

They engaged in this activity of trading in a commodity they did not already own in anticipation that the market price would fall.

When it came time to deliver the bearskin, the trader would buy one for less than the original sale price and then earn money off the transaction.

This practice gave rise to metaphors that were in use at the time, including "do not sell the bear's skin before catching the bear," "selling the bearskin," and "bearskin jobber," all of which served as cautionary statements against speculation and making promises you cannot keep.

However, the expressions took on a more precise connotation among stock traders and investors who knew the practice of speculating on an impending decline.

Investors began to refer to people who traded stocks in the same way as "bear traders" or "bearskin traders" in the end.

A "bear" engaged in what is known as a short sale, selling a stock that he did not yet possess, like how bear pelts were historically sold by bear hunters who had not yet captured the animal.

There are differences in the characteristics of bull and bear markets. These are discussed below:

In a bull market, high GDP growth is anticipated, and as economic demand rises, so does industrial output, sales, and turnover.

Bear market, in contrast, is characterized by low expectations for the GDP, a reduction in demand that caused a drop in production, low sales volumes, and turnover.

Despite involving higher risk, stocks have the potential to offer higher returns in a bull market. Returns on equity investments are favorable at the moment.

In a bear market, maintaining capital and a steady income becomes crucial. As a result, investors are looking for less risky investments, including government bonds, gold investments, and bank fixed deposits.

In a bull market, the production rate is increasing and is favorable for wholesalers due to the rising demand. Increasing wages lead to increasing price demands from suppliers.

In contrast, demand declines or holds steady in a bear market as only necessities are needed. The retail sector is under pressure as the prices for food, clothing, and fast-moving consumer goods (FMCG) increase.

Foreign investors are drawn to the high-interest rate environment as the interest rate cycle rises during a bull market phase. These high rates put a cap on excessive investment in capital expenditures (CapEX).

During a bear market phase, interest rates are lowered to encourage investment in capital expenditures. During this period, foreign investors refrain or stop from making investments or stop.

Consumer spending has increased, and the economy is doing well during the bull phase. With the hope that the economy will expand and perform well, an individual's purchasing power will increase.

Consumption decreases in a bear market as spending power does. A person intends to increase their savings because they want to protect their capital until the economy recovers.

The industry is expanding, production is thriving, and the economy is in excellent condition during a bull market phase. Its positive growth produces employment.

Conversely, a portion of the industrial and production units are impacted by the slow economy during a bear market. An effort to reduce expenses results in layoffs, which raise the unemployment rate. 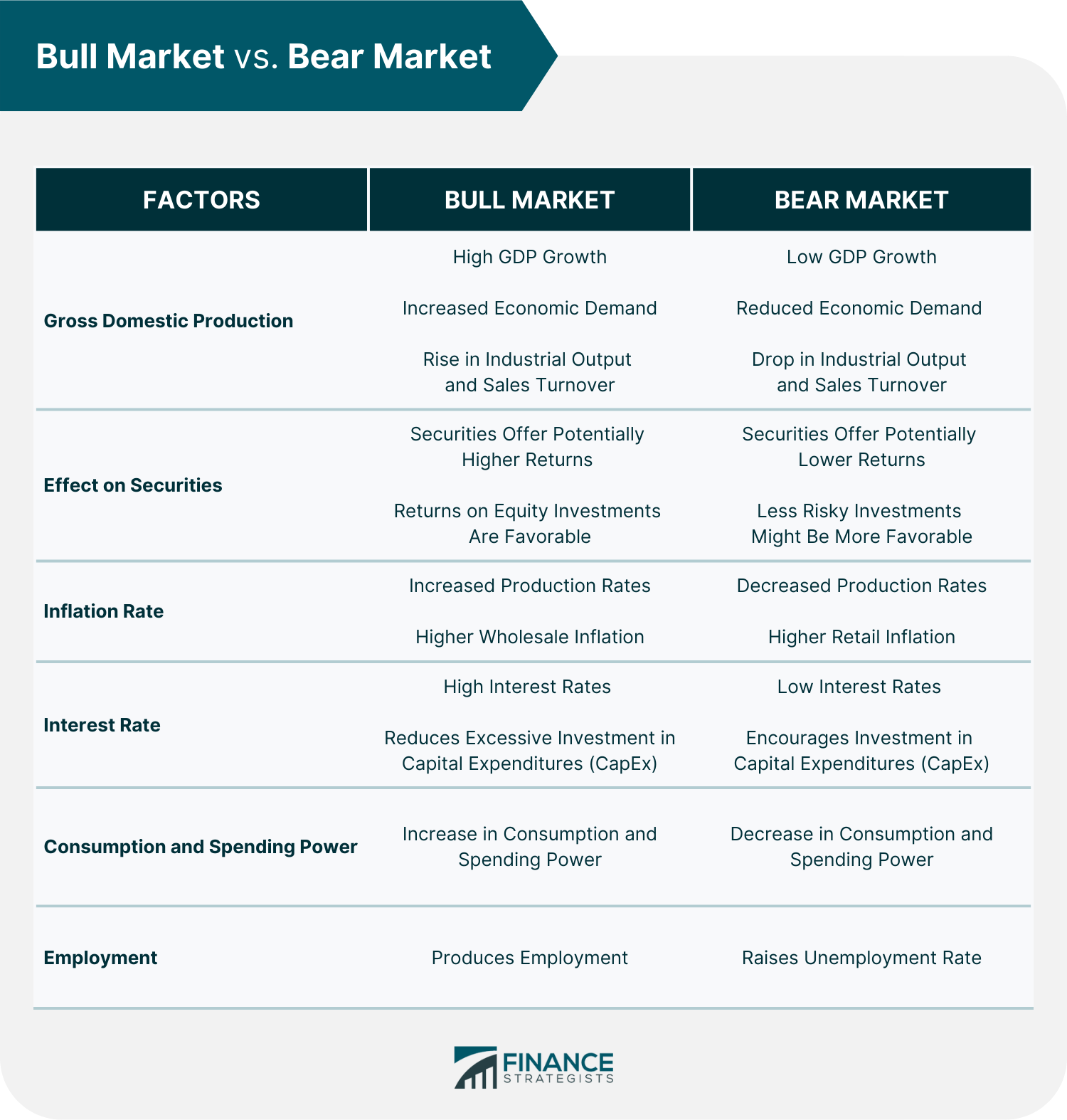 How to Invest in a Bull vs Bear Market

Investors can best take advantage of rising prices in a bull market by buying stocks as early as feasible in the trend and then selling them once it has peaked.

Any losses should be temporary and minimal in a bull market. So, an investor can confidently and aggressively invest in more equity with a higher likelihood of profit.

On the other hand, the chances of loss are more prominent in a bear market because prices continuously lose value, and the end is occasionally not in sight.

Even if you invest in hoping for recovery, it will probably be some time before anything changes. Short-selling or safer investments like fixed-income securities are deemed most profitable in this scenario.

Another option for an investor is defensive stocks from companies usually owned by the government.

Despite economic ups and downs, defensive stocks hold their value. Their performance is mostly unaffected by changing market trends because they often sell necessities.

Taking a short position in a bear market and profiting from declining prices can also be advantageous for investors. Numerous strategies exist to accomplish this, such as selling short, purchasing put options, or purchasing inverse exchange-traded funds (ETFs).

Bull markets are known for their long-term growth potential and higher returns, while bear markets offer opportunities for lower prices and profits from short-selling.

The key to successful investing is to understand the difference between the two types of market conditions and adjust your investment strategy accordingly.

Whether you are a bull or a bear, knowing how to invest in each market is essential for success.

Both bullish and bearish markets have their own distinct characteristics that make them different from one another.

While it is impossible to always predict which type of market conditions will prevail, by understanding the key differences between bull and bear markets, investors can be better prepared to profit no matter what the market conditions may be.

How long do bear markets last?

What was the longest bear market in history?

The longest bear market occurred in 1973–1974 and lasted 630 days or almost 21 months. During that time, the stock market experienced a 48% decline.

What is the difference between a bull market and a bear market?

What does it mean to be bullish and bearish?

What are the factors that differ between a bull market and a bear market?

The factors that differ between a bull market and a bear market are gross domestic production, prices of the economy, inflation rate, interest rate, consumption and spending power, and employment.